Let us not put a spin on this, Middlesbrough FC have struggled this season.

C£40million spent on a new strike force and attacking options have led to 38 league goals and 33% of the this season games were that same attacking unit have failed to trouble the scoreboard. In the same 10 games we have had 32 shots on target.

So just pause for a second, it is not normal for a team to have that many chances, on average 3.2 shots on target a game, without scoring. So who is to blame, is it the last regimes recruitment, apart from Assombalonga who has lead the line with his goals at least if not his “manliness” no one player has significantly contributed.

The below table, of the players still at the club, highlights this failure of the team as a whole, defenders have scored more goals than what I would consider to be attack minded midfielders. 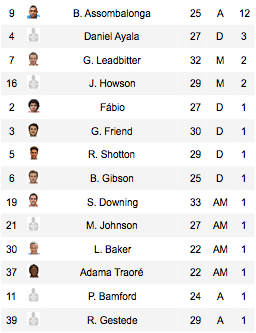 With that in mind it is fairly mind boggling that both Ashley Fletcher and Martin Braithwaite have been allowed to leave along with the exclusion of Lewis Baker without reinforcements. I am struggling to keep faith in this team and more and more feel like it will not be a smash ‘em up season more like a consolidation.

Or is it still a hangover from Aitor Karanka defensive do not lose at all costs playbook, can these players not release the shackles. Is this now the ethos of the entire club? I sincerely hope not but something has to happen in order for Middlesbrough to save this season.

If Tony Pulis and Steve Gibson have promotion this season and I truly hope they do, the rest of February is absolutely key to the remainder of the season.

The next four fixtures feature the current bottom three and a home game versus Reading who have won 1 game since the second of December. The target has to be four wins from the four games to stay in contention for a playoff spot. Boro have to lose this Jekyll and Hyde aspect of recent performances.

Think back to the start of January, New Year’s Day, Boro had just come from behind to beat Preston, the first such win in what seems like decades. Then moved on to neighbours Sunderland in the cup and dismissed them like a fly. Then Fulham and depression that came after battering the West London wall for what seemed like days before a soft penalty was lifted by a sublime performance at QPR.

The thought process for me anyway was ok, Fulham are a good side in decent form, and we showed what we are about against QPR. Now we are going to play Wednesday, we already beat them, should be another three points and we are rolling. Only for the attacking deficiencies to rear there angry head once more.

So roll on Reading, Burton, Hull and Sunderland, I will be back in a month hopefully writing about a playoff push rather than a Tony Pulis fire sale.